To share your memory on the wall of Joan Broski, sign in using one of the following options:

Print
Joan Margaret Broski, a resident of Miramichi Lodge, Pembroke, Ontario, passed away at dawn on Sunday April 18, 2021 in her 92nd year after a sad and courageous struggle with Dementia, a disease aptly described as “the long good-bye”

... Read More
Joan Margaret Broski, a resident of Miramichi Lodge, Pembroke, Ontario, passed away at dawn on Sunday April 18, 2021 in her 92nd year after a sad and courageous struggle with Dementia, a disease aptly described as “the long good-bye”

The support provided by Joan, an army wife, was a major reason why her husband, Lieutenant Colonel Stanley Broski (retired) and her son Dr. Anthony Broski attained successful careers in their professions. Notwithstanding her fear of flying, Joan travelled to Europe on several occasions to join her husband. She was very adroit in masking her apprehensions with her sense of humour. Her favorite posting was New York. Her lifelong interest in fine clothing was a factor in how quickly she learned to navigate to Macys and Bloomingdales. She is probably now using her skills to put together her ensemble of celestial raiment.

Joan was predeceased in death by her parents, Nelly and Ernie Hammond, brothers Frank, Mickey (Michael) and Jack (John) and sisters Ethyl and Eileen.

A Funeral Mass at St. Columbkille’s Cathedral will be held when it is safe to do so and will be announced, followed by interment in Beechwood National Military Cemetery, Ottawa.

In memory of Joan donations to the Dementia Society Ottawa Renfrew County or Miramichi Lodge would be appreciated by the family.

To send flowers to the family or plant a tree in memory of Joan Broski (Hammond), please visit our Heartfelt Sympathies Store.

We encourage you to share your most beloved memories of Joan here, so that the family and other loved ones can always see it. You can upload cherished photographs, or share your favorite stories, and can even comment on those shared by others.

Posted Apr 19, 2021 at 03:46pm
My deepest condolences Stan; Joan and I shared many hours over many years discussing and altering her clothing, she has been missed and will be missed.
Kim McLaren

Posted Apr 19, 2021 at 09:06am
My deepest sympathy to Stan and family. She was such a sweet lady. May she rest in peace and perpetual light shine upon her.
Bernadette Chaput
Comment Share
Share via:
LP 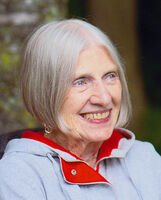